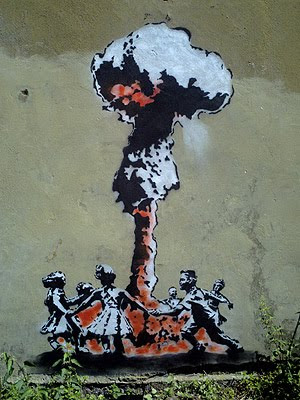 THE ABOVE WALL PAINTING IS NOT BY BANKSY, but a Banksy-influenced artist indeed!

Now, about Banksy!
Notorious though elusive street artist Banksy, whose work has decorated his home town of Bristol to Israel's West Bank barrier, has turned his hand to film-making. Exit Through The Gift Shop will have its world premiere at the Sundance Film Festival.
WHO IS BANKSY?
http://news.bbc.co.uk/2/hi/entertainment/7504132.stm
Sounds like a tabloid headline, doesn't it?
Well, since we've studied some documents about him, including some of his works, I thought you might be curious though I hope he keeps up the good job and doesn't fall into the abyss of power. For I believe fame is one of a kind.
Anyway, here you will watch the trailer of the movie Exit Through the Gift Shop
Read the article too.
http://news.bbc.co.uk/2/hi/entertainment/arts_and_culture/8471145.stm
Youtube Banksy, watch and say what you think in the comments.
Good for your English! Do I preach in the wilderness?
Posted by E. Bilien at 12:36 AM