And if you want these other posts, type Banksy in the searchbar of the blog!
And visit http://banksy.co.uk/ and to follow Banksy's October NYC tour,
you can go to this interactive map: http://nymag.com/daily/intelligencer/2013/10/interactive-map-banksy-tour-of-nyc.html?mid=twitter_nymag or keep updated here: http://animalnewyork.com/
Don't you love it? 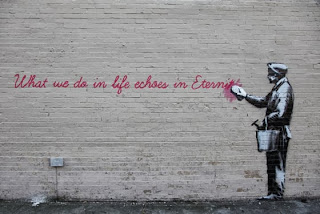 Hello to all in the "English Room"!

What do you make of the mayor of New York calling Bansky's work vandalism? Do you agree to some extent?

Just this morning, I learned about the wildly popular temporary street-art project "Tour 13" in Paris...

As both exhibits have drawn enormous crowds, I think a comparison is very fitting and brings about some interesting perspectives/questions. I know it made me think about this kind of art differently!

All my best,
Erin in New York

Speaking of satirical art, maybe you'll like this collective of artists: http://www.maentis.com/

Thanks for sharing, Cécile!

You're welcome, Erin! Their art is similar to Banksy's graffitis.

Vandalism involves a form of nuisance. I don't think Banksy's work hurts anyone but Reality. I think he turns cities into a free and gigantic museum. This map is a brillant idea! (and I don't even bring up the fact that I feel like a Goonie looking for treasure chests!)

I appreciate your perspective. In the spirit of debate, I'll raise this issue:

Bansky doesn't own the spaces he uses as a blank canvas. So how dearly do we (or should we) value private property?

We might ask oursrselves if this form of expression is a right. What if everyone who had an opinion about our society did the same thing? Where do we draw the line between self-expression and disrespect for the property of other people?

The counterargument may be that the paintings add value and beauty; they are improvements, not damage.

Unfortunately, due to Bansky's celebrity status, people are drawn to his work to destroy and/or steal it as much as to admire it. Fights and scuffles have broken out on the streets as other "taggers" try to ruin his art. Bansky has moved on; he is not left to manage the nasty aftermath. It is the property owner who must often face a difficult (and sometimes dangerous) situation.

Can we still say that it's not a "nuisance"? In his obscurity, doesn't Bansky flee "reality" -- the real (if ugly) reactions of real people?

At least he's making us think about it! :)

Your questions are really pertinent!

My point of view is mainly influenced by my interest in Banksy's art and messages. I like his way of thinking and his artwork in general so it's easier for me to accept his "artistic invasion" than others, but you're absolutely right! Everybody has a voice and if someone wanted to draw something I don't like or don't support on my building's facade, I would probably not welcome it the same way.
Actually if everybody drew everywhere, the world would look like a Pollock painting! The real question is: Are we ready to become epileptic? Do our eyes deserve this experiment?
The other day, I burnt my own eyes by drawing a pool full of M&Ms. The message was strong: "let's eat more colorful food", it was my own drawing, and yet I didn't approve it. If I had made it on a building instead of a small piece of paper, a whole population would be blind by now!

More seriously, I didn't count the collateral consequences. I always forget that people are good at destroying/stealing everything. Indeed, in this case this is clearly a nuisance! The ""funny"" thing (double quotation marks are necessary) is that troublemakers maintain Banksy's content without knowing it. We can say: "Isn't Banksy one too?"... Probably, but I prefer people who fight with spray paint cans instead of guns.

I'm not sure to have good answers but you definitively have good questions! :)