A funny, friendly scientist, an astrophysicist in love with the whole universe.
http://www.haydenplanetarium.org/tyson/

Slumdog Millionaire is a great movie. Here is the trailer.
I hope it makes you feel like seeing the film.

My favourite speech on Inauguration Day 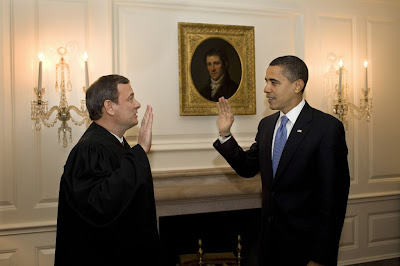 Read the following article and find out why the U.S. president chose to take the oath again.

Obama takes the oath of office, slips of the tongue and the place of adverbs

Yesterday, Obama took the oath of office. He had to repeat it after the Chief Justice. See previous post.

The 35-word oath is explicitly prescribed in the Constitution. It reads:
"I do solemnly swear that I will faithfully execute the office of president of the United States and will to the best of my ability, preserve, protect and defend the Constitution of the United States."
But Chief Justice John Roberts' administration of the presidential oath to Barack Obama was far from smooth.

But here's exactly what was said yesterday:

Who stumbled? The flub was Roberts'.
During the oath, Chief Justice Roberts switched some words up. ... When Roberts erred, one child shouted: "That's not right!"
Their momentary disfluency came down to a problem of adverbial placement. In giving the oath, Roberts misplaced the word "faithfully," at which point Obama paused quizzically. Roberts then corrected himself, but Obama repeated the words as Roberts initially said them.
There was one other minor slip-up on Roberts' part: in his first run-through of the embedded clause, he got a preposition wrong, saying "I will execute the office of president 'to' the United States," rather than 'of '. A less noticeable speech error, but nonetheless the type of thing that happens when one speaks from memory without written prompts, as Roberts apparently did.
Several constitutional lawyers said President Obama should, just to be safe, retake the oath of office that was flubbed by Chief Justice John Roberts.

Last part of that speech:
"So let us mark this day with remembrance, of who we are and how far we have traveled. In the year of America's birth, in the coldest of months, a small band of patriots huddled by dying campfires on the shores of an icy river. The capital was abandoned. The enemy was advancing. The snow was stained with blood. At a moment when the outcome of our revolution was most in doubt, the father of our nation ordered these words be read to the people:

"Let it be told to the future world...that in the depth of winter, when nothing but hope and virtue could survive...that the city and the country, alarmed at one common danger, came forth to meet [it]."

America. In the face of our common dangers, in this winter of our hardship, let us remember these timeless words. With hope and virtue, let us brave once more the icy currents, and endure what storms may come. Let it be said by our children's children that when we were tested we refused to let this journey end, that we did not turn back nor did we falter; and with eyes fixed on the horizon and God's grace upon us, we carried forth that great gift of freedom and delivered it safely to future generations.
Posted by E. Bilien at 6:23 AM No comments:

Pistol shots ring out in the barroom night
Enter patty valentine from the upper hall.
She sees the bartender in a pool of blood,
Cries out, my god, they killed them all!
Here comes the story of the hurricane,
The man the authorities came to blame
For somethin that he never done.
Put in a prison cell, but one time he could-a been
The champion of the world.

Three bodies lyin there does patty see
And another man named bello, movin around mysteriously.
I didnt do it, he says, and he throws up his hands
I was only robbin the register, I hope you understand.
I saw them leavin, he says, and he stops
One of us had better call up the cops.
And so patty calls the cops
And they arrive on the scene with their red lights flashin
In the hot new jersey night.

Meanwhile, far away in another part of town
Rubin carter and a couple of friends are drivin around.
Number one contender for the middleweight crown
Had no idea what kinda shit was about to go down
When a cop pulled him over to the side of the road
Just like the time before and the time before that.
In paterson thats just the way things go.
If youre black you might as well not show up on the street
less you wanna draw the heat.

Alfred bello had a partner and he had a rap for the cops.
Him and arthur dexter bradley were just out prowlin around
He said, I saw two men runnin out, they looked like middleweights
They jumped into a white car with out-of-state plates.
And miss patty valentine just nodded her head.
Cop said, wait a minute, boys, this ones not dead
So they took him to the infirmary
And though this man could hardly see
They told him that he could identify the guilty men.

Four in the mornin and they haul rubin in,
Take him to the hospital and they bring him upstairs.
The wounded man looks up through his one dyin eye
Says, whad you bring him in here for? he aint the guy!
Yes, heres the story of the hurricane,
The man the authorities came to blame
For somethin that he never done.
Put in a prison cell, but one time he could-a been
The champion of the world.

Four months later, the ghettos are in flame,
Rubins in south america, fightin for his name
While arthur dexter bradleys still in the robbery game
And the cops are puttin the screws to him, lookin for somebody to blame.
Remember that murder that happened in a bar?
Remember you said you saw the getaway car?
You think youd like to play ball with the law?
Think it might-a been that fighter that you saw runnin that night?
Dont forget that you are white.

Arthur dexter bradley said, Im really not sure.
Cops said, a poor boy like you could use a break
We got you for the motel job and were talkin to your friend bello
Now you dont wanta have to go back to jail, be a nice fellow.
Youll be doin society a favor.
That sonofabitch is brave and gettin braver.
We want to put his ass in stir
We want to pin this triple murder on him
He aint no gentleman jim.

Rubin could take a man out with just one punch
But he never did like to talk about it all that much.
Its my work, hed say, and I do it for pay
And when its over Id just as soon go on my way
Up to some paradise
Where the trout streams flow and the air is nice
And ride a horse along a trail.
But then they took him to the jailhouse
Where they try to turn a man into a mouse.

All of rubins cards were marked in advance
The trial was a pig-circus, he never had a chance.
The judge made rubin’s witnesses drunkards from the slums
To the white folks who watched he was a revolutionary bum
And to the black folks he was just a crazy nigger.
No one doubted that he pulled the trigger.
And though they could not produce the gun,
The d.a. said he was the one who did the deed
And the all-white jury agreed.

Rubin carter was falsely tried.
The crime was murder one, guess who testified?
Bello and bradley and they both baldly lied
And the newspapers, they all went along for the ride.
How can the life of such a man
Be in the palm of some fools hand?
To see him obviously framed
Couldnt help but make me feel ashamed to live in a land
Where justice is a game.

Now all the criminals in their coats and their ties
Are free to drink martinis and watch the sun rise
While rubin sits like buddha in a ten-foot cell
An innocent man in a living hell.
Thats the story of the hurricane,
But it wont be over till they clear his name
And give him back the time hes done.
Put in a prison cell, but one time he could-a been
The champion of the world.
Posted by E. Bilien at 7:51 PM No comments:

Noam Chomsky about the current situation

« What I may call : ‘The messages of Brave New World’ : that it is possible to make people contented with their servitude.
I think this can be done. I think it has been done in the past but then I think it could be done even more effectively now ‘cause you could provide them with bread and circuses and you can provide them with endless amounts of distractions and propaganda. »
A.Huxley sends the following letter after the publishing
of 1984 by George Orwell)

October 21st, 1949
Dear M. Orwell, the nightmare of 1984 is destined to modulate into the nightmare of Brave New World. The change will be brought about as a resulf of a felt need for an increase in efficiency. Thank you once again for the book.
Yours sincerely.
Aldous Huxley

I thank those of you who will help me fill in those blanks.
Posted by E. Bilien at 9:22 PM No comments: 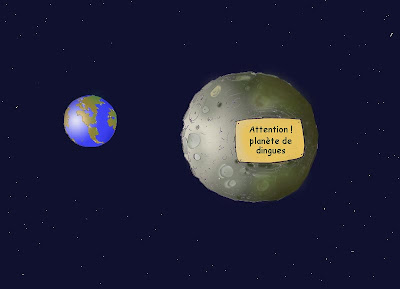 In spite of a torn muscle in my back (Malgré une déchirure musculaire dans le dos) due to a skating accident and one of those frightful gastroenteritis,
I want to wish you a happy new year.
I don't know if i'll be back to school on Monday. Time will tell.